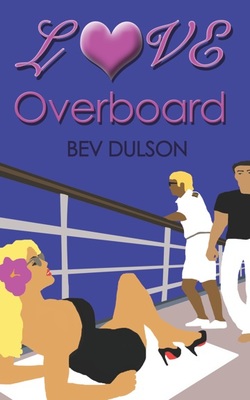 The love of Lucie's life comes back to find her, but has he missed the boat?

Travel Agents, Lucie and Zoey have a ball onboard 'Oceania' sailing around the Caribbean on a working holiday. Lucie falls for Nick, a member of the entertainment team. After two weeks of total passion Lucie finds herself back home, without Nick...

Five years later Lucie has moved on and is in a new relationship, but she's never quite forgotten the man who made her heart race like no other. Nick decides he's had enough of life on the ocean wave and heads home, with Lucie, the girl who he thinks may just be the one that got away at the forefront of his mind.

Lucie thinks her life is pretty sorted, until Nick returns and she has to decide who really is the man for her... it's not all plain sailing.

SOME REVIEWS FROM AMAZON:


Cinders -  This review is from: LOVE OVERBOARD (Kindle Edition) Love Overboard is the perfect holiday read or summer read or winter read or the old man's gone to rugby read. In fact its the perfect anytime read.

You will effortlessly glide through the past and the present.....but will Lucie and Nick?
This book had me laughing, crying, holding my breath, nodding my head in acknowledgment, ignoring the housework and forgetting to put the other halfs dinner on :-0 as i couldnt put it down.
The characters are realistic,complicated and flawed. Nothing is beyond the realms of believability and it isnt the usual format of boy meets girl and everything is perfect. However, you wont find any spoilers here you'll just have to read it for yourself.
May i suggest you settle yourself down with a cuppa a wispa bar and a clear diary...............oh and send the old man to the chippy!!

For me, this book has it all...friendship, love, passion, humour, sorrow, broken hearts, guilt, anger and frustration. Bev Dulson has a way with words that allows you to become lost in her book. You instantly fall in love with the characters (those that don't smell of Vanderbilt) and you feel all of their emotions along with them. You feel their pain and heartache and feel their love and joy. Over the last few days I have cried tears of sorrow and delight and I have giggled my way through the story. I have laughed out loud at Bev Dulsons fabulous wit. This is a fantastic holiday read, buy a copy and get it packed in your suitcase. Great work once again from Bev Dulson, I am awaiting her next book with great anticipation.

Lucie is our heroine, she is quiet and shy but a fun loving girl at heart. She instantly connects with Zoey when they meet on Oceania - they share a smilar sense of humour. She is quite strong willed and generally knows what she wants.

She also attracts the attentions of Nick, one of the ships entertainment guys, which leads to a whirlwind romance. He brings her out of her shell and lose control of her senses, she has the best two weeks of her life. Back in England life moves on, with Nick and Lucie losing touch. She then meets Ant...one half of the gorgeous rugby playing twins - Adam & Ant. Life is pretty good, she's settled and happy with Ant...but what happens when Nick returns? 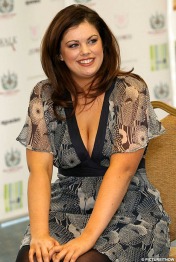 Zoey is Lucie's best friend, their two weeks in the Caribbean making them ship mates for life. She is loud, always making jokes, and never stops talking. She uses her bubbly nature to hide her insecurities. She adores her husband Adam and her friendship with Lucie is very important to her. She worries that the return of Nick could spell disaster...but she has baby making plans to help take her mind off it. 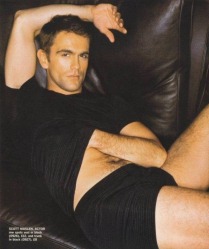 NIck is responsible for entertaining the passengers onboard Oceania - he takes his role very seriously, especially when he meets the lovely Lucie. He charms her with the cheeky glint in his eye and his sexy smile. Their passionate two weeks is something he's never forgotten and when he finally leaves the ship to attempt life on dry land she is at the fore front of his mind. Would she still fall under his spell now or had she moved on? There was only one way to find out... 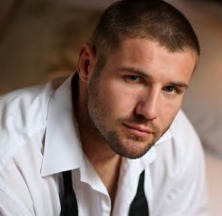 Ant is the younger half (by five minutes) of the afore mentioned "gorgeous rugby playing twins" Adam & Ant. Ant tends to find himself in his twin brothers shadow, but that never bothers him too much.   He is also the husband of Lucie, who he really loves, but sometimes has trouble showing her.

ADAM MAXWELL (Another chance too look at pics of Ben Cohen!!) 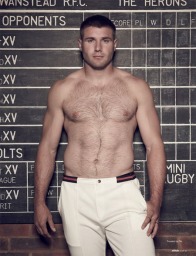 Adam, the older twin is married to Zoey, they are perfect for each other - both totally crazy.  He is the more assertive twin and is very protective of his younger brother.   He is quite happily loved up with Zo and making note of all her instructions from them to get pregnant - no hot baths or tight pants (so he better whip those ones off in the photo - sorry!!!) 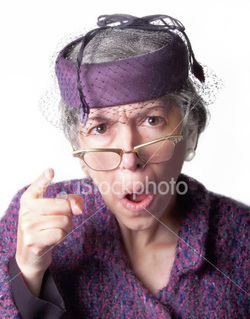 The bain of  Lucie & Zoey's life... The Mother in Law or Old Ma Maxwell is the err "term of endearment" they use for her. She's interfearing,  sticks her nose into everything, wears dodgy twin sets and could cause death by over exposure to Vanderbilt perfume.  She adores her twin boys and in her eyes she should be number one in her boys' lives, so Lucie and Zo are not her favourite people, how very dare they take her boys away!  She is far too opinionated and is the only person who thinks she's funny.
Things aren't all plain sailing when Nick returns looking for the love of his life...

Pictures of "The  Ship"

Picture one is of the atrium - usually the center point of the ship. The decks are quite open so you can see right from the top of the atrium down to where the comfy chairs are in reception. This is where Zoey and Lucie place themselves when they are on duty for their customers. There is also a lot of hustle & bustle in the atrium in the evening time, lots of photographs being taken and the captain will usually do the "welcome aboard" speech from the top of the atrium.

Picture Two is a snap shot of a "party night" out on deck, could be a tropical night, cocktail party - whatever the event, it's the place to be, partying the night away with the wind in your hair! The big screen is  for "Movie under the stars". The party deck isn't the highest deck on the ship, there are smaller ones higher up out of shot.

Picture Three - literally sailing off into the sunset, there is nothing like it!

Picture Four is what Zoey & Lucie's cabin would've looked like - it's just as well they got on, not enough room to swing a cat in there - the cabin probably wouldn't be this tidy either...

SOME OF THE ISLANDS FEATURED IN LOVE OVERBOARD:

PICTURE 1: - The beautiful and colourful island of Antigua where Lucie and Nick escape from the ship for the day and spend the day "relaxing" on a beach.

PICTURE  2:- The island of Domica has a rainforest in the middle of it giving sudden downpours. Nick and Lucie get caught in one!

PICTURE  3:- Grenada is the first port of call for Oceania and so starts the beginning of friendships and romance.

PICTURE 4:- Sunset over the Pitons in St Lucia, Lucie and Nick share their first kiss away from the ship looking at this beautiful view.

PICTURE 6:- Ah, the ship sailing off into the sunset... 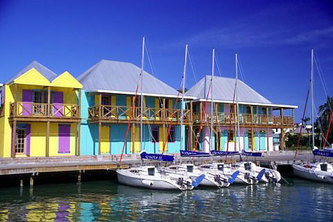 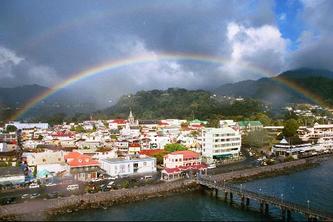 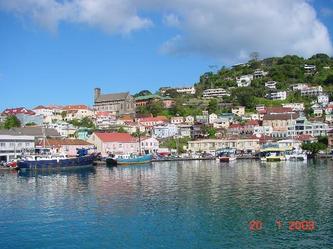 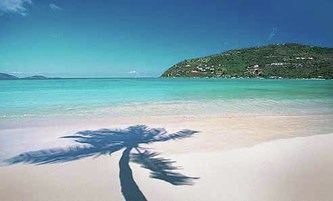